Statistics Canada has just released its population estimates for sub-provincial areas as of July 1, 2019 and it appears that Thunder Bay's population -  while one of the slowest growing of Canada's CMAs - is nevertheless growing.  On July 1st 2019, Thunder Bay's Census Metropolitan Area reported 127,201 people which is an increase over the previous year of 0.7 percent.  Of the 36 major CMAs, Thunder Bay ranked 32nd and its growth rate was larger than the other major northern Ontario city on the list - Sudbury - which came in at 0.4 percent.  Population growth rates ranged from a high of 2.8 percent for Kitchener-Cambridge-Waterloo to a low of -0.1 percent for St. John's with the Canadian CMA average being 1.7 percent.  The accompanying chart presents the population growth rate rankings for all of the CMAs.  So, as far as things demographic go, this is pretty go news.  Thunder Bay is not shrinking. 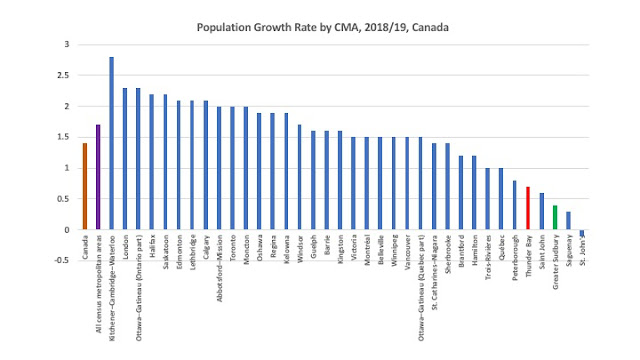 Posted by Livio Di Matteo at 10:04 Links to this post

I have been working on an article surveying the economic history of northern Ontario and thought a summary overview draft of where I am going with it would be a worthwhile post. The entire article is going to be much more detailed but this excerpt below provides a pretty good overview of the direction it is going. Enjoy.


A Very Brief Survey of Northern Ontario Economic History
Livio Di Matteo
Northern Ontario’s economy began in the 19th century as a booming resource frontier as a result of favourable international market demand for natural resource commodities which were supplemented by government policy initiatives in transportation and protectionism. Export-led growth approaches to development suggest that such a growth process can ultimately expand population and market size leading to self-sustaining economic growth, but Northern Ontario never made that transition and in the latter part of the twentieth century and early twenty first century can be viewed as having undergone arrested development.